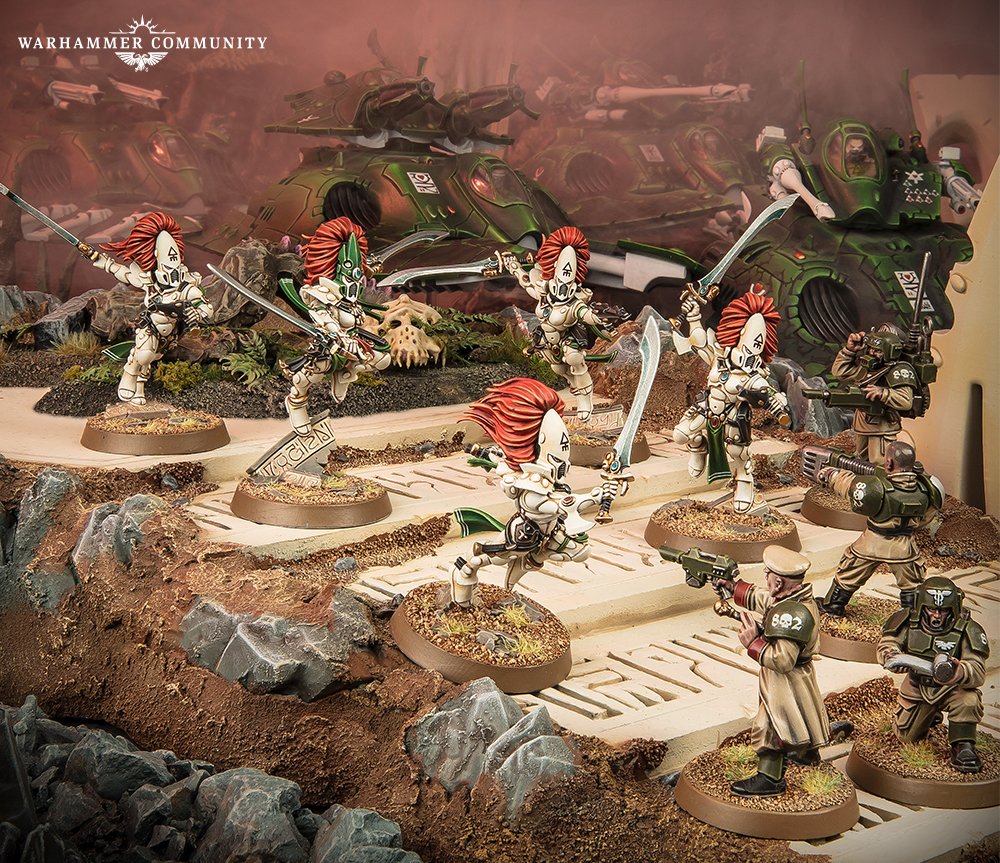 There’s a ton of hype around the new Aeldari models being previewed over on Warhammer Community. If you’re new to the hobby or haven’t read much about factions, you might find yourself asking who are the Aeldari?

The Aeldari, or Eldar to us Mon-keigh (the not-polite term the Aeldari use in reference to the citizens of the Imperium), are an extremely advanced and ancient race of peoples. They once ruled an Empire than spanned the known galaxy. This Empire was without equal at it’s height, and encompassed both realspace and the Webway – a labyrinth of extra dimensional space that was divided off eons ago by the Old Ones. The Aeldari now utilise these twisting paths for faster than light travel, though some still dwell within.

The Aeldari ruled all that they surveyed and each was a powerful psyker. They were essentially immortal, for when their spirits left their bodies they re-entered the Immaterium to be reborn in a new form.

Their long lives and powerful abilities allowed them to spend their days pursuing their desires. Striving for perfection in whatever pleased them led to hedonism and immoral practices. The extremes of the Aeldari psyche and combined hubris and debauchery spread throughout their Empire led to the creation of their downfall. The chaos god Slaanesh, called ‘She Who Thirsts’ by the Aeldari, was spawned.

The birth of a chaos god consumed the heart of the Aeldari Empire, swallowing hundreds of worlds. Slaanesh slew vast numbers of Aeldari and defeated their gods – the survivors of their pantheon imprisoned or scattered. Additionally, where once the Aeldari were deathless now their souls are claimed by Slaanesh to sustain her. Without soul stones or infinity circuits to protect their souls they are lost forever.

The might of their Empire shattered, the Aeldari scattered to survive. The all encompassing civilisation broke down into distinct factions. Each one developed based on how they chose to survive the predation of She Who Thirsts.

Asuryani, or Craftworld Aeldari, fled from their soon to be destroyed homeworlds on continent sized space vessels, known as Craftworlds. These remnants of the Empire have scattered across the galaxy. Connected to each other through the webway these Aeldari seek to protect themselves from Slaanesh by adhering to the rigid behaviour standards of the Asuryani Path. On death they transfer their spirits to soul stones to protect them. The five most politically significant Craftworlds are the Alaitoc, Biel-Tan, Iyanden, Saim-Hann and Ulthwé.

These Aeldari settled in the webway, namely the city of Commorragh. Instead of following strict rules to avoid Slaanesh the Drukhari protect themselves through the Path of Damnation. They feed upon the psychic residue of suffering, inflicting emotional and physical pain by tourturing their captives. This grisly method fends off the soul sucking pull of Slaanesh.

The dancing, performing and deadly Harlequins serve the Laughing God Cegorach, having followed him into the webway during The Fall. Their God’s power protects them from Slaanesh’s thirst, and they defend the Black Library. Hidden deep in the webway this is the collective knowledge of the Aeldari’s Empire, in particular all they know of Chaos. The Harlequin’s troupes move between all the factions of the Aeldari, spreading and keeping alive the knowledge that forms the centre of their culture.

Exodites is the name given to the Aeldari who fled their ancient homeworlds before The Fall. They settled on distant, luscious, un-colonised planets and formed settlements. These worlds, known as Maiden Worlds have become home to these Aeldari. They avoid falling prey to the dark impulses that led to The Fall by living lives with more hardship and less technological assistance than their pre-Fall ancestors. They keep themselves safe from Slaanesh by merging their souls with the spirit of their Maiden Worlds on death.

Devotees of Ynnead, the part awakened God, from all factions of the Aeldari have drawn together to form the newest faction. Led by the High Priestess Yvraine the Ynnari fight for the full awakening of their god. They believe Ynnead will defeat Slaanesh and restore the Aeldari to their former glory. They have no fear of Slaanesh, because when they fall their souls are made one with Ynnead.

So who are the Aeldari?

An ancient, once dominant empire that fell victim to their own pride. The Aedari have been hardened by the tragedy they have suffered. While many believe they can return to their former glory, the light of their people has faded, and they’re likely fighting to to prevent it’s total extinction.

Are you going to be picking up any of the new Aeldari? Let us know in the comments!

Did you enjoy this article or found it helpful? You could always tip the author with a coffee (or something stronger). If you want to pick up any of the new Aeldari when they’re released (or buy something to build until then!) then check out Element Games. They have up to 25% off on a wide range of units, box sets and accessories. Finally, make sure you’re following us on Instagram to stay up to date and get involved in our community!